The fourth of six scheduled rounds of the 2020 FIA European Rally Championship started in Hungary on Friday evening – it will last from 6 to 8 November. The rally headquarters is hosted by the town of Nyíregyháza, and the special stages are located in the hilly countryside on wooded roads around the Zempléni Landscape Protection Area.

Last year, being the final round of the season, the rally offered the participants some extra competitive elements – except narrow asphalt paths, rain and mud brought on the road by the wheels of cars became an additional challenge to the luck of every crew. This year the weather conditions on the tracks and the rally roads have changed, but still ahead for each of the crews about 200 kilometers of the competitive distance of one of the most difficult rounds of the FIA European Rally Championship!

For the Russians Alexey Lukyanuk and Dmitry Eremeev, who drive their usual Citroen C3 R5 from the French team Saintéloc and with the support of Citroen Racing and Total, this race will not be easy. At the moment, Lukyanuk and Eremeev are the leaders of the series in the personal standings of drivers and co-drivers; and the entry list of announced crews for the event includes more various rally stars than ever appeared at the start before this round in the current season. Oliver Solberg, literally pursuing the Russians in the intermediate classification of the championship, changed his car in the hope of more successful performances. The “visiting guest performers” from the FIA World Rally Championship – Mads Ostberg and Andreas Mikkelsen will definitely not look like harmless guys on a walk. In the fight for the podium, the names of these successful drivers are unlikely to get lost somewhere in the lower part of the scoresheet – Nikolay Gryazin, winner of the ERC1 youth championship who returned to the European rally, Craig Breen and Emil Lindholm, Gregor Munster, Polish champion Miko Marczik, reigning ERC3 champion Efren Llarena, Erik Kais and the four-time Hungarian national title holder Norbert Herzig and Yoann Bonato, inspired by his success in the previous championship round. There are 56 crews in the entry list, and 33 of them drive the R5 class vehicles.

Despite worldwide antiviral events and the cancellation of many motorsport competitions, Hungary was not only able to organize a high-level sporting event, but also found it appropriate to admit spectators to certain viewing areas of the rally, subject to strict social distance rules. But access to the rally service park is limited in accordance with a strict protocol developed by the FIA – only teams, service personnel and members of crews are allowed there.

However, the usual colorful ceremonies of the start and finish of the rally were replaced by the obligatory passage through the podium before the start of the super special stage on Friday for safety reasons. Better known in another motorsport discipline, the 2.4 km rally-cross track Rabócsiring has become a warm-up for all drivers. The fact is that the new rules for the European rounds of 2020 instruct the rally organizers to complete all events within four days, and the Hungarian rally promoters were unable to schedule free practice, qualifying stage and shakedowns in the program due to the limited time for pre-start events. 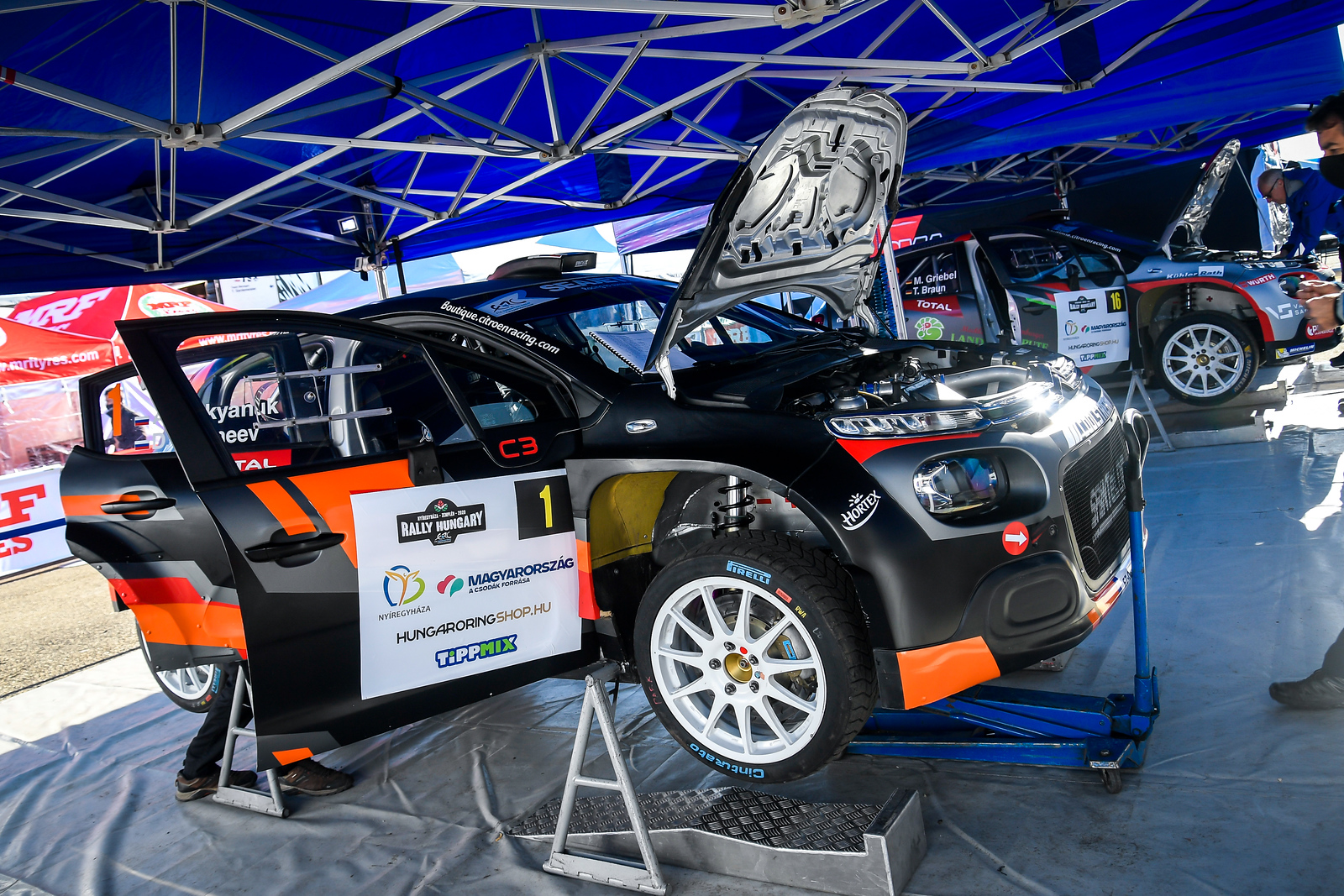 Alexey Lukyanuk, driver, “I think it’s the best start of the season so far – three events and we are finished every round and score to victory. And I am happy so how it goes. We need to keep the same pace, the same attitude and the same approach to build on this.

It’s always complicated here in Hungary, because the weather and the season actually all roads tense to be wet and muddy, and here especially in a lot of places. Luckily, they’re all changed a bit from last year and now it’s not so hard for us. And I appreciate there from organizers to build this event, because, in this time especially, it’s really complicated to do. I’m so happy not to be at home and I being racing now, of course it will be very tough event, very tricky, but we hope to do well.

We will try to do our best actually to extract the maximum from the car, from the tires, so we need to see the event. At last year we had four punctures in the rally, so it can be some kind of a lottery in places and you cannot predict what composition of tires will work. The start list is very strong, it’s builds some pressure inside of course, but we have our own mindset and goals for this event, so we will try to follow that lines.

I would like to thank our partners for their support – to Citroen Racing and Total, to Saintéloc and to Pirelli – they support us quite a lot and give proper tools to make a proper performance and also, I’m really happy to start here. Thanks to all our sponsors, because at these times I was not sure that we can come here, but it happened, so thanks to everyone who makes it possible”.

On Saturday, Lukyanuk and Eremeev “open” sports traffic on the stages of the first day, starting first in the field – for such rapidly changing road conditions, this is an advantageous position that will allow the crew to see the roads as close as possible to the conditions during the recce. Most of the planned race kilometers will fall on Saturday. On Sunday, the starting order for the top ten crews that have successfully completed the first day will be reversed, and it will be more difficult to guess the state of the road surface when starting after several cars have passed.